Gene therapy holds promise to treat the root cause of many pathologies of the central nervous system, including brain tumors and neurodegenerative diseases. However, the delivery of systemically administered gene carriers to the CNS is hindered by both the blood-brain barrier (BBB) and the nanoporous and electrostatically charged brain extracellular matrix, which acts as a steric and adhesive barrier. We have previously shown that these physiological barriers may be overcome by, respectively, opening the BBB with MR image-guided focused ultrasound (FUS) and microbubbles and using highly compact “brain penetrating” nanoparticles (BPN) coated with a dense polyethylene glycol corona that prevents adhesion to extracellular matrix components. Furthermore, we showed that this combined approach could be used to deliver systemically administered gene-bearing BPN across the BBB and mediate robust, localized, and sustained transgene expression without signs of toxicity or astrocyte activation (Mead et al., Journal of Controlled Release, 2016: 223: 109-117). Indeed, we have recently demonstrated that delivering brain-penetrating nanoparticles, housing a gene for the neurotrophic factor GDNF, to the striatum elicits a nearly complete restoration of dopaminergic neuron density and dopamine production, as well reversal of two behavioral indicators of motor dysfunction in a rat model of Parkinson’s disease (Mead et al., submitted). Further development of this therapy, including testing of promising nanoparticle alternatives and preclinical testing in additional animal model of Parkinson’s disease may potentiate improved treatments of brain diseases. We collaborate closely with the Hanes lab at Johns Hopkins University on this project. 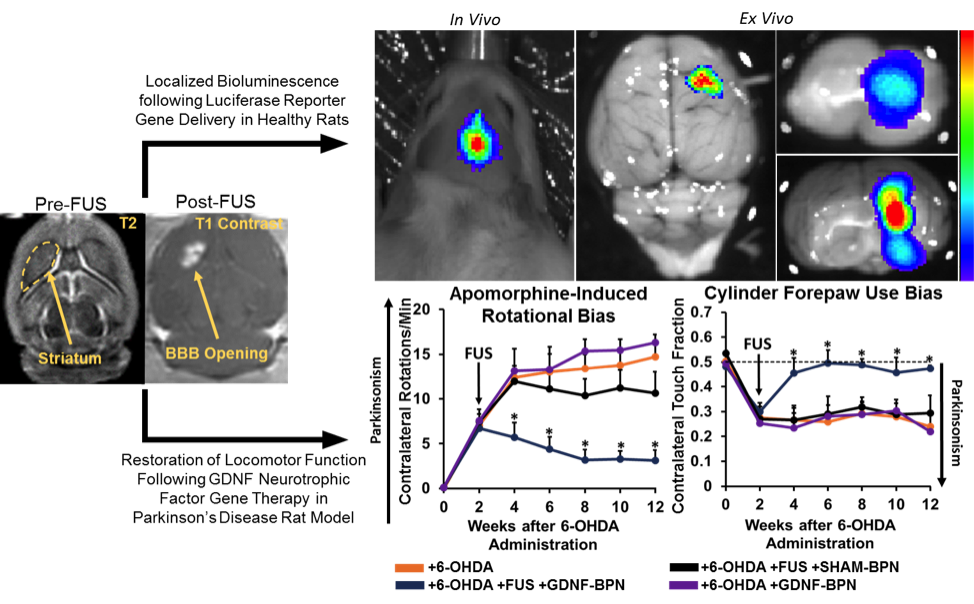